Hello everyone! As part of Short Story Saturday, I have posted another short story, this one entitled An Anonymous Letter. Inspired loosely by https://www.writersdigest.com/prompts/the-hate-note. Please enjoy.

“I think you’ll like what’s inside,” said the auburn-haired, bushy-bearded man as he handed a beaten up envelope to the glowering man standing stood crossed arms in front of his fancy two-story abode. “Sorry, it got all messed up and stuff. It’s been sittin’ in my pocket since this mornin’. Meant ta give it to ya then but I forgot. Sorry about that Corny.”

“It’s Cornelius,” the clean-shaven blonde man replied as he removed one arm from his chest to take the envelope out of his neighbor’s hand, “I wait to see its contents with breathless anticipation, Timothy.”

“Told ya before ta go ahead and call me Scooter. All my friends do.”

“I’ll keep that in mind, Timothy. Oh, look over there.” Cornelius pointed at the stoop of Scooter’s brown dilapidated home across the road with a free hand.

“No foolin’.” Scooter walked over to his stoop. An envelope had been placed on top. “What’s this?”

His neighbor sneered. “You don’t even know what a letter is?”

“I know it’s a letter. But whazzit say?”

“I have a stellar idea. Why don’t you open it up and find out?”

Scooter did as he was instructed and after gawking at the page for a few moments, he walked over to his where his neighbor was standing.

“Would ya mind readin’ it for me, Corny?”

“Cornelius. Don’t tell me you don’t know how to read.”

“I does but I can’t read so good with all them fancy words. Would you mind reading it for me?”

“Very well!” Cornelius rudely snatched the envelope from Scooter’s hand, ripped the envelope further open, and ham-fistedly pulled the letter out. “And stop calling me Corny!”

The letter had a small tear as a result of Cornelius’s brusque actions which obscured some words making some sentences completely incoherent. This did not deter him as he barely needed to glance at the letter to recite its message.

“Dear Timothy MacGillicuddy, I like to believe I have been exceedingly fortitudinous in the multitude of years it has been my grave displeasure of having to live next to your abode, but even Gandhi undoubtedly would rage if he had to deal with such adversity. I wish to lodge several grievances towards you starting with that beast you call your pet.

Your mongrel defecating in my yard is merely the latest in a long list of grievances I have with your dog. I know you’ve tried to make light of this, but I must insist that you stop throwing your mongrel’s toys into my yard. You’ve jokingly suggested that I could use these toys to play with my little dog but I assure you that my bichon frise, unlike your inelegant monster, is not the kind of animal to demean itself by playing fetch.

I cannot help but think that your lax attitude toward playing with your terrible creature has instilled bad habits in him. Your dog on several occasions has leaped over my fence to chase my little dog around undoubtedly prompted by your throwing of balls into my yard. You’ve dismissed my concerns by saying the two are merely playing. I assure you that being terrified is the antithesis of entertainment.

Now I move towards my objections to you, your friends, and your family. Your raucous parties at all hours of the night are making it difficult for me to sleep. I can’t tell you how many nights I’ve lied awake in my large bed enduring the drivel you call music. I’ve also had to deal with your perpetual and incessant yelling, screaming, and laughter with your friends and family, along with your unremitting riding of that infernal scooter all around town. Even in my cavernous home, it is still possible to hear every decibel.

At the first opportunity, I am moving to a new neighborhood but for the time being, I implore you to amend your behavior though I would sooner expect to drink the entire ocean before I’d expect even a modicum of concern from you. I surely do not anticipate that you will any way ever alter your personal conduct. I do ask, though, that you please bathe every now and again and brush your teeth. It would help with your malodorous, putrid smell. It’d be a good first step, at least.

Please take corrective actions immediately. I beg of you.”

Cornelius flipped the paper over several times before answering. “It appears that the letter writer neglected to leave a signature.” His voice trailed, “What a stupid mistake….”

Cornelius sighed and rolled his eyes. “I haven’t the foggiest.”

“Coulda been my wife Alice. She yelled at me pretty good for watchin’ football all day yesterday, I tell ya what.”

“Considering she lives with you, I doubt it’d be necessary for her to leave a letter on your stoop.”

“I reckon yer right. She could have left it on the kitchen table.”

“Plus it wouldn’t make sense for her to write about your dog terrorizing her dog considering the two of you own the same animal.”

“A bichon frise is a dignified breed of dogs intended for owners with the utmost class.”

“What kind of name is that fer a dog?”

“It’s French. You know, from France. The French moniker gives the dog an aura of elegance.”

“My uncle coulda left me the letter.”

“What makes you possibly think that?”

“It most certainly does not! Your uncle’s French bulldog doesn’t nearly have the nobility of the bichon frise. A bichon frise could be a champion show dog if raised correctly in a peaceful environment! I suppose a French bulldog could be a champion show dog too but that’s like comparing the New York Yankees to the Seattle Mariners especially when, presuming he is anything like yours, your uncle’s dog may as well have been raised at a state fair.”

“If ya say so. Still, I think my uncle coulda done it. We’s got into a fight over the Sooners and Volunteers ‘gain. We should never call each other on Saturday. Anyway, dat could be what made ‘im do it.”

“Unlikely. Part of the ire written about in the letter directly mentions your dog terrorizing his and using his lawn as a makeshift commode. Where does your uncle live again?”

“Well I dunno, he’s pretty smart. ‘Course he’d a had to take the truck. Don’t think I ever taught ‘im to drive a stick.” Scooter laughed and slapped his knee, an action that made Cornelius scorn. “I reckon yer right, tho’. If it ain’t my uncle, there’s someone else it coulda been. Maybe my brother wrote the letter.”

“I have a feeling that you’re getting close. It would have to be a neighbor. It’s only logical that it would be someone nearby.”

“Uh-huh. Plus we’s got into a fight while we was huntin’ for truffles a while back. Told ‘im he could take a swig of my bottle and he damn near drank the whole thin’. Wouldn’t bother me so much ‘cepting he does it all the time and never pays me back tho’ he always says he would. I yelled at ‘im pretty good. ‘e didn’t say nothin’ to me the rest of the trip. Maybe he got mad.”

“A letter seems a little extreme to express dissatisfaction over being reprimanded for attempting to drink an entire flask of whiskey.”

“Besides, at what grade did he drop out of school again?”

“Does he have an extensive vocabulary, or should I say, does he know all them fancy words?”

“So it’s probably not him.”

“Is there anyone else you suspect?”

“I reckon there’s one suspect left but it can’t be ‘im.”

“Whom do you suspect? Your grandfather? Your great uncle? Little William from across the street?”

“I s’pose it coulda been you.”

“Really? How very shocking. I am flabbergasted with the accusation. Please do elaborate. Tell me why you think it’s me.”

“Well, ya does have a fancy dog and know all them fancy words. Plus I know ya ain’t that pleased with our hootenannies going fer long hours and us not invitin’ you or nothin’.”

“Not that I’d ever debase myself by attending your soiree. I prefer my solitude.”

“If ya say so. ‘Course, I know you can’t be the letter writer guy.”

Cornelius let out an exasperated sigh. “How on earth did you come to that conclusion?”

“I figure yer too good a guy.”

“I know my friends and me can be a bit tryin’ with our hootenannies and with my dog runnin’ around like wild when he escapes from us and me tossin’ some of ‘is toys and balls into your yard and all our yellin’ and cussin’ and stuff, but you’ve been very patient with us all. Ain’t really yelled at us or nothin’, never really got mad. We felt bad so we’s thought we’d invite you to a BBQ we’s a havin’ this Saturday.”

“Nope. Open that envelope and find out yerself.”

Cornelius did as instructed. Inside was an exceedingly well-crafted if not crude and poorly spelled invitation which implied, albeit in an unsophisticated way, that they would be honored if the man attended their barbecue at the end of the week.

“I know it ain’t yer kinda thing, but we’d plum-like it if you came over this Saturday.”

“It is an unexpected development to say the very least.”

“Now, let’s get back to the matter at hand. Do ya know who wrote me that letter?”

“The letter? Oh, right, the anonymous note. Do you know what I think? I think it was a prank by some teenagers. Yes, teenagers, they are the ones who did it.”

“Or perhaps it was simply a mistake. Regardless, I think it’d be best if we just forgot the whole affair altogether.” Cornelius demonstrably tore the letter apart.

“I wouldn’t miss it. See you Saturday, Scooter.”

The two men waved as Cornelius unlocked his door entered his abode. His tiny bichon frise yapped as she greeted him.

“Hi Persephone,” the man said as he reached down and pet the dog with his free hand. After placing the invitation on his mantle, he walked over and gazed through the glass window to his cozy backyard. He sighed upon seeing it. It was littered with various balls and dog toys. He was used to it by now. The man opened the door and walked outside.

Persephone stood by the open glass door as he cleaned his yard. Upon realizing she was staring, the man bade her to come out and join him. After a few tentative footsteps, the little dog gleefully ran to the side of her master.

Among the various bits of debris lied an old tennis ball. Though the ball was practically bigger than the canine’s head, Persephone took interest in it. Noticing this, the man picked the ball off the ground and tossed it for her. As the two began an impromptu game of catch, Cornelius wondered what sort of wine would go well with corn biscuits and gravy. 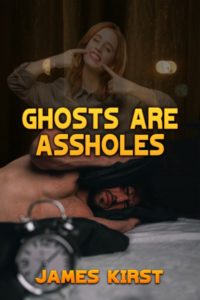