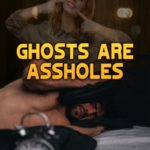 Happy to announce that my first book, Ghosts are Assholes, published by World Castle Publishing, LLC, is launched today on Amazon and other online sites in e-book and paperback form. Please see the main page for more details or click on the image above to get to the Amazon order page. If you enjoy the story, please feel free to submit a review on Amazon, Goodreads, or any other review site you can think of. Please subscribe to the blog for more updates and short stories in the future. I hope to write more novels in the future as well so please look out for that too.

As a bit of a celebration of the release, please read a bonus short story involving the adventures of everyone’s favorite medium, Vincent Pietro. It is entitled The Friendliest Ghost I Know:

“Are you sure you want to go in here?” Vincent directed the question towards the apparition standing next to him by the door of the white rambler.

“I have to know exactly what happened,” the poltergeist explained.

“Ed pretty much told us. He’s one of my closest friends and the most trustworthy man I know.”

“It’s not that I doubt the veracity of your friend the desk sergeant. I just need to confirm.”

“Actually, most of them have, just not the most important one.”

With a nod, Vincent knocked on the blue door. A few short moments later a brunette in a sweater and pink pants answered the door.

“Hello,” she said in a saccharine voice, “May I help you?”

“We talked over the phone. I’m Casper’s cousin.”

“Ah yes, that’s right. What did you say your name was again?”

“Right, like the actor or I should say late actor. Anyway, please come in.” The woman led Vincent into the house. Casper floated over his shoulder as he walked through the living room towards the stairs.

“I’m surprised Casper never mentioned you,” the woman said as she began the ascent.

“Eh, family must have not been that important to Casper, at least not extended family.” The young man bumped into the woman who had suddenly stopped in her tracks. She had turned to stare daggers at Vincent.

“Not important? He was the only man I knew who could name all of the members of his extended family.” As if on cue, the apparition recited each of his family members to a barely listening Vincent.

After a short pause, Vincent explained. “Okay, you caught me. I have to confess. That’s not the reason he doesn’t talk about me. You see, I’m kind of the black sheep of the family. A couple of years ago I got really big into Scientology, I mean really big. I only came to my senses a couple of months ago and even then it was quite the legal battle to get myself out of there. I wanted to reunite with my dear cousin, but by the time I escaped, he was already gone.”

“Oh dear, Scientology? No wonder we never heard about you. Casper hated that so-called faith.”

“Yes, I’m well aware,” Vincent said with a sigh as the ghost began prattling on about the horrors of the aforementioned religion.

The woman resumed her ascent. Vincent dutifully followed along. Casper was right behind both of them.

“I’m sorry we couldn’t have met under more pleasant circumstances. I assure you, it was an accident. I’m sure that will become quite apparent once you see her. Have you ever met Melinda?”

“What a shame. She’s not the same girl she used to be. She used to be so happy, so energetic, so eager to enjoy life. She loved Casper too, perhaps even more than he loved her if such a thing were possible. They had only been married for about a year when it happened.”

The woman led the man to the bedroom door at the top of the upstairs hallway.

“Melinda,” the woman said knocking on the door, “It’s me, Tiffany. I’m with Edward. Would you mind if I come in?”

“Who’s Edward?” the voice behind the door asked.

“Casper had a cousin named Edward? Why didn’t he ever talk about him?”

“He was a Scientologist until recently.”

Tiffany opened the bedroom door. A young woman with brunette hair and puffy pink eyes, handkerchief in one hand stared listlessly out the window. Next to her was a table full of assorted food. Behind her was an unmade queen bed. The furniture, the dressers, the drawers, and all of the various decorations and tchotchkes in the room were covered with a layer of dust.

When the door opened, Casper immediately flew by the side of the woman sitting in a wooden chair next to the window.

“Honey,” Tiffany said as she entered the room, “You haven’t touched your food. You have to eat.”

“I know you’re depressed, but please eat Melinda. I worry about you so much. The whole family does.”

“Sure as hell Casper’s parents aren’t worried about me.”

“Are you kidding? Xavier and Beatrice called me this morning to check up on you. They worry about you as much as anybody.”

“Sure, okay. Whatever. By the way, beautiful sunset, isn’t it?”

“Casper would have loved that sunset. He loved sunsets almost as much as he loved me. Now he can’t love anything anymore. Because of me! Because I shot him!” Tears streamed down Melinda’s face. She began to wail. “I killed him!”

Even though Melinda could not hear him, Casper did his best to protest. “Nonsense, Melinda, even in death I could never stop loving you.”

“I’m sorry, Edward. Melinda’s been like this for a while. You see, she shot Casper. It was completely by mistake. She thought he was an intruder. She pulled the trigger before she realized who it was. Hit him right between the eyes. He was dead almost instantly. Ironically, she meant for it to be a warning shot.”

“I remember everything now,” Casper said as knelt next to the crying woman as he tried in vain to hold his wife’s hand. “I had just returned from Santa Barbara. I had arrived a day early. My work completed faster than I expected. I should have called but I thought it’d be funny to play a little trick on her. I snuck in. I thought I was as quiet as a church mouse but apparently, she heard me enter and thought I was an intruder. I didn’t realize this, of course. Otherwise, I would have said something. Scared and alone, she grabbed the gun and fired.”

“Ed did say it was an accident,” Vincent muttered.

“Yes, but now I remember how and why.” Casper positioned himself so that he was right in front of his wife. “Melinda, I am so sorry you have to go through all of this. I forgive you for everything. The whole matter was my fault. You have to move on with your life. I don’t want you to spend the rest of it staring out the window crying your pretty little eyes out. I’m not worth it. Smile for me.”

Casper began to fade. A melancholy smile crept onto his face. “Please do it for me.” The man had disappeared by the time he finished his sentence.

For a moment, the tears stopped and Melinda stared where Casper was kneeling. She then turned towards her sister. “I don’t care what you say, Tiffany. You can’t deny that I killed him.” Her voice became progressively louder. “I killed him. I killed him! I killed him!”

“I think I should leave,” Vincent said already beginning to back out the door.

“Yes, I think that would be the best,” Tiffany said somberly, “I’m sorry about this, Edward. I thought seeing one of Casper’s family members would help but obviously, it did not. I’m sure she’ll feel better one day. I’ll give you a call when she does.”

“Goodbye, Edward. It was a pleasure meeting you.”

Vincent left the room. As he plodded down the stairs, he couldn’t help but mutter, “Not even he thanked me for the work I put into this case. They never thank me. Assholes.”